Intensive vaccination process continues in Turkey to protect against the coronavirus epidemic. CoronaVac, developed by Sinovac company of China, and Pfizer/BioNTech, known as German vaccine, are used in our country. According to Sinovac, those who hesitate to get the Biontech vaccine question the side effects of the Biontech vaccine. Currently, there are two different vaccines developed using the mRNA method and approved for use worldwide. The other vaccine is the Covid vaccine developed by the US company Moderna. However, Moderna is not yet used in Turkey.

This method is actually based on copying the genetic structure of the virus. mRNA, or “messenger RNA” (ribonucleic acid), It is known as a biomolecule produced from DNA. In mRNA vaccines, unlike traditional vaccines, the mRNA of a protein of the virus is given to the body instead of the attenuated pathogen. Thus, it is aimed that the immune system will act without the virus and produce antibodies against the virus.

Scientists say that the widespread use of mRNA-developed vaccines for the Covid-19 pandemic could be a breakthrough for many other diseases. Under this technique, a portion of the virus’s genetic code is taken and coated with oil to penetrate cells. This liquid is injected into humans. Thus, the genetic code from the virus is delivered to human cells. The vaccine makes cells produce a copy of the hedgehog protein that allows the coronavirus to enter the cell. Thus, the immune system also produces antibodies and T cells begin to fight against these structures that the body perceives as harmful. There are currently two widely used vaccines using mRNA technology. The first of these is the Covid vaccine developed by Moderna. According to the company’s report to the US Food and Drug Administration (FDA), this vaccine is 94 percent effective in preventing symptomatic cases. The other is the vaccine produced by Pfizer/BioNTech. The company also gives the vaccine’s effectiveness rate as 95 percent. Data from real-life applications reveal a similar picture after their broadcast usage began. In Israel, one of the countries with the fastest vaccination program in the world, BioNTech vaccine was found to reduce symptomatic cases by 94 percent and hospitalizations by 87 percent after two doses.

mRNA HOW SAFE IS THE VACCINE?

Since it is a new technology, it has been at the center of many unfounded claims and conspiracy theories lately. However, these claims have no scientific basis. There is no question of changing people’s genetic makeup or DNA. Vaccines developed using this technology are not very durable. For this reason, it must be transported and stored in a very cold temperature. The UK Joint Vaccine Commission announced that very rigorous and detailed investigations were carried out on the safety of both BioNTech’s and Moderna’s vaccines, and that these vaccines were approved for use after they were firmly convinced that they are safe. The US Centers for Disease Control and Prevention, stating that the work on mRNA technology has been going on for 10 years, defines these vaccines as ‘new but familiar’.

“Ignore it, pretend nothing’s wrong, wouldn’t the problems go away if we didn’t talk about it? Unfortunately, playing the three monkeys doesn’t help anyone. Today we’re going to talk about the potential side effects of vaccines, both reported and predicted. There are mRNA-based vaccines under the spotlight. Shortly after vaccination.” those who had a heart attack afterwards; those who died after vaccination and died due to internal bleeding as a result of the immune system attacking the clotting cells; those who died due to excessive coagulation of the blood…

It is possible to talk about many cases associated with corona vaccines. As the global vaccine campaign continues at full speed, reports of the undesirable effects of vaccines are increasing. For example, after receiving the second dose of the German-origin mRNA-based vaccine in Israel, 62 people, mostly men, under the age of 30, developed myocarditis (heart muscle infection), two of whom died (1) (a 22-year-old woman and a 35-year-old man). Both had no health problems until they were vaccinated.

These and similar side effects are reported to American institutions such as CDC (Centers for Disease Control and Prevention) and FDA (Food and Drug Administration). What are they doing? With a small warning note, they say “Continue to be vaccinated, the most effective method for protection is vaccination”! You will see it when you go to CDC’s site. The site writes that the mRNA-based vaccine is at risk of causing heart inflammation, especially in young men, with an increase in reported cases of myocarditis and pericarditis since April. (2) This risk, which has been glossed over with a few sentences, boils down to vaccine propaganda.

“Worse Than the Disease? The publication “Reviewing Some Possible Unintended Consequences of the mRNA Vaccines Against COVID-19” draws attention to the possible side effects of vaccines developed against COVID-19, especially mRNA-based ones. (4) According to the study, many of the side effects of mRNA-based vaccines may occur in the following years. It is noted in the publication that a sudden increase may be observed in neurodegenerative diseases seen at much younger ages, blood disorders manifested by excessive bleeding or coagulation, stroke and heart attack within 10 years. 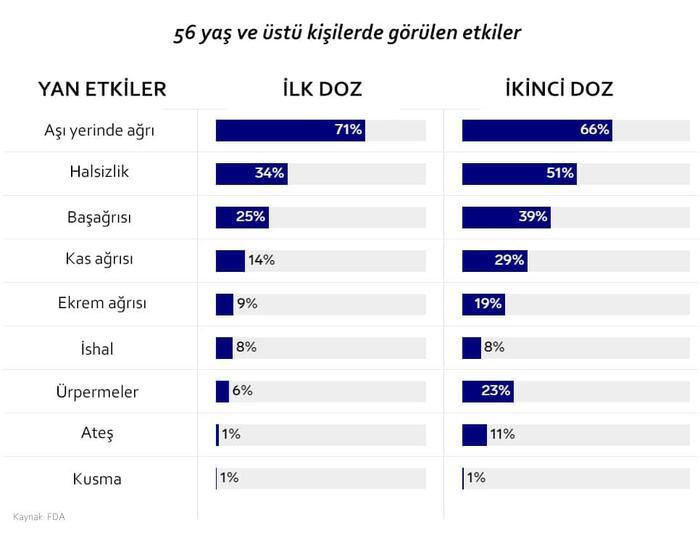